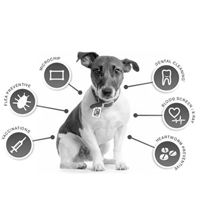 It is an insurance for dogs against death due to accident and/or diseases contracted during the period of insurance subject to usual terms, conditions and exclusions of the policy.

Who can be insured?

Dogs in the age group of 8 weeks to 8 years are insured.

Dogs of indigenous origin, cross-bred and exotic breeds are covered under the insurance.